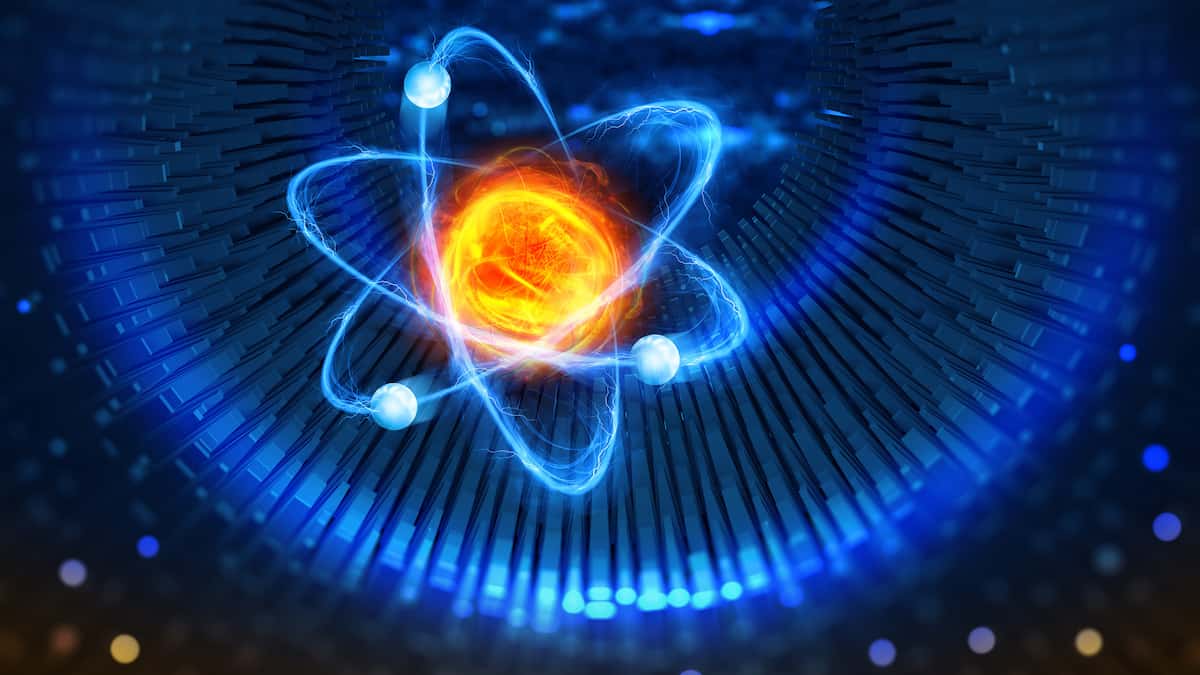 Written by Holly Perrett on August 8, 2022. Posted in Company News

After months of optimisation and development work, the first set of measurements has been made using the Artemis quantum mass spectrometer. This is a huge milestone, as it demonstrates that the components of the instrument are working together as they should be.  These preliminary results inform us of what needs to come next in order for the instrument to be employed in industry, measuring the isotopic ratios of radioactive elements in environmental samples.

In ongoing proof-of-principle studies, we are measuring high-lying energy levels of argon atoms, as argon is readily-available and easy to work with. By measuring these energy levels and obtaining values which match those documented in scientific literature, we can verify the functionality of our spectroscopy system. The results also illustrate which areas of the system would benefit from further development. In these studies, our experimental method is continually refined, with the outlook of making the same measurements for a wide variety of elements, and ultimately for a variety of isotopes.

Figure 1: On the left, shows an example of some CRIS data recently collected using the Artemis beamline. The figure on the right demonstrates how the peaks relate to transitions between atomic energy levels. Two peaks in atomic argon are shown, from the metastable 4s[3/2]2 state (to which about 50% of ions are neutralised as they pass through the charge exchange cell) to 2 fine structure components of the n = 16 Rydberg state (given in the key at the top left.)  Gaussian profiles have been fit to each peak, the centres of which are 0.01 cm-1 or less away from values of these transitions documented in the scientific literature (Pellarin et al, 1988.) The units of inverse centimetres are a unit of energy, commonly used by spectroscopists.

How it works: the experimental method

In our initial experiments, argon gas is injected into the apparatus and ionised by bombarding the gas particles with high-speed electrons, which boil off a lightbulb-like tungsten filament. The argon ions are accelerated to high energy and guided by electric fields through a cell filled with vaporised sodium metal, which neutralises the incoming ions, producing a beam of argon atoms travelling at high speed (this process is discussed in detail in the previous articles, ‘Fast Atoms‘.)

To measure atomic energy levels, the argon atoms are overlapped with a tunable ultraviolet laser beam. The energy E of a photon is related to its frequency F through the equation E = hf, where h is a fundamental constant of nature.  This means that when the frequency of a laser is tuned, the energy of the laser photons is changed too. When the energy of the photons matches the energy required to excite argon atoms to a higher energy level, the atoms can absorb a photon from the laser beam. In atomic physics and physical chemistry, this process is known as resonant excitation. The excited atoms are ionised using another energy source, such as an electric field or another high-power laser beam.  The resulting ions are then guided to a detector, where they are counted with a high-speed data acquisition system that is capable of detecting single atoms at a time.

Atoms of each element have a distinct set of quantised energy levels in which their electrons can reside. Electrons usually exist in the lowest energy level available to them, in which case the atom is referred to as being in its ‘ground state’. When an electron is promoted to a higher energy level through absorbing a photon of electromagnetic radiation, the atom is ‘excited’. This can happen if the photon has an energy equal to the energy difference between the upper and lower levels, which is unique to each element, so a photon which excites an argon atom, for example, might not excite an oxygen atom. Atomic energy levels serve as an elemental fingerprint and form the basis for optical spectroscopy.

When an atom is in an excited state, its outer electron resides, on average, further away from the nucleus than it does in a lower state of energy. Because of this, the excited electron experiences less binding attraction to the nucleus and is therefore easier to remove from the atom; in other words, excited atoms are more easily ionised than their lower-energy counterparts. Atoms can exist in a great many different excited states, depending on the amount of energy that is absorbed. In general, the more energy that is absorbed, the further away from the nucleus the electron will reside, and the easier that electron will be to remove from the atom.

Very high-lying energy levels are known as Rydberg states. Rydberg states are a topic of great interest to many chemists and physicists, with relevance in a wide range of fields, ranging from astrophysics to quantum computing. As Rydberg atoms are so easily ionised, this can be achieved using relatively little energy, such as with an electric field produced through applying voltages to a set of electrodes. For us at Artemis, this is a useful tool for element selective analysis. Using a lower energy source minimises the risk that interfering species present within the apparatus will be ionised and measured too, which could otherwise drown out the signals we are looking for.

In the first phase of experiments, the ionisation step has been achieved by applying an electric field to the region of space through which the excited atoms travel. The field is set up so that the electric field strength changes drastically over just a few millimetres, by applying voltages of between -3000 V and + 3000 V to three extremely delicate wire grids. The grids are composed of carefully wrapped wire which is 10 micrometres thick – less than half the width of a human hair. The more drastically the electric field strength changes over a region of space, the more likely the field is to free an electron from an excited atom.

An imperfect analogy could be tying a balloon (the electron) to the wing mirror of a moving car (the atom). If the car was travelling along at a steady speed and slowed down gradually, the balloon could remain tied to the wing mirror. However, if the brakes were slammed on and the car came to a sudden halt, the balloon would be more likely to break free. The liberating forces originate from the interaction between the electric field and the electrical charge on the electron and nucleus. However, field ionisation is in reality a quantum mechanical process, and the electron acquires enough energy to break free of the atom through quantum tunnelling.  The potential energy barrier, which in the absence of an electric field prevents the electron from leaving the atom, is substantially lowered in the direction towards the field anode, so the electron can leave the atom in this direction.

To find the optimal voltages required to ionise the atoms of interest and guide them to detection, simulations of the apparatus are performed. The results of the simulations, an example of which is shown in figure 2, provide approximate values which can be used as a starting point, from which we search for a hint of a resonant ion signal. Once a signal has been detected, the voltages are fine-tuned to maximise the number of ions being measured.

Several transitions in atomic argon have been measured to be consistent with documented values, showing that our apparatus is functioning as required for elemental analysis. From our preliminary spectra, one of which is shown in figure 2, the advantages of field ionisation show up immediately, as mostly 0 ion counts per second are measured in between spectral peaks. This is fantastic news for the future of the apparatus, as it means that when we come to measure very rare isotopes, the small signals from the species of interest will not be drowned out by interfering background ions. 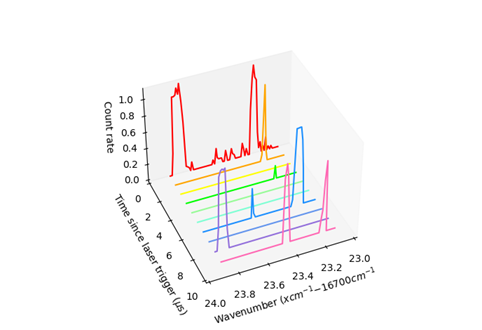 Figure 2: A 3-dimensional plot showing some CRIS data collected at the Artemis beamline, scanning the laser around frequencies corresponding to transitions from the metastable 4s[3/2]2 state in atomic argon to the n=16 Rydberg level. The laser frequency (plotted as ‘wavenumber’) is shown against the number of measured ions per second (on the vertical axis) and the time in microseconds between the moment a laser pulse is fired and the moment the ion is detected. The variety of peaks, each detected at different times relative to the laser pulse, indicates the production of ions via different processes (field ionisation and photoionisation), as well as the presence of species other than argon in the beam. The addition of an electromagnet to the setup will minimize signals from these other species.

From energy levels to isotope ratios

If an environmental sample, such as some krypton gas separated out from the atmosphere, is ionised and formed into a beam, the more abundant isotopes will contribute a greater fraction of the total particles in the beam. When overlapping the neutralised beam with a laser, more atoms of the abundant isotopes will be excited, ionised and subsequently detected than of the rarer ones. This means that, as long as the signals due to the different isotopes can be sufficiently told apart, the relative intensity of these signals (i.e., the relative sizes of peaks arising from different isotopes in a spectrum) can be used to determine the isotope ratios of elements in the sample.

The peaks from different isotopes are already separated due to the fact that the ions are accelerated. Different mass particles travelling with the same kinetic energy travel at different speeds. This means that the laser frequency is doppler shifted by different amounts for each of the different isotopes so that in the lab frame of reference, the excitation frequency of each isotope will be shifted relative to the others. Additionally, in order to rid our spectra of peaks from interfering masses, over the coming weeks a large electromagnet will be installed, which will physically separate the paths of different mass components in the beam.

All in all, it has been an exciting year so far for the scientific team at Artemis analytical, and we greatly look forward to reporting on the upcoming progress over the next few months.