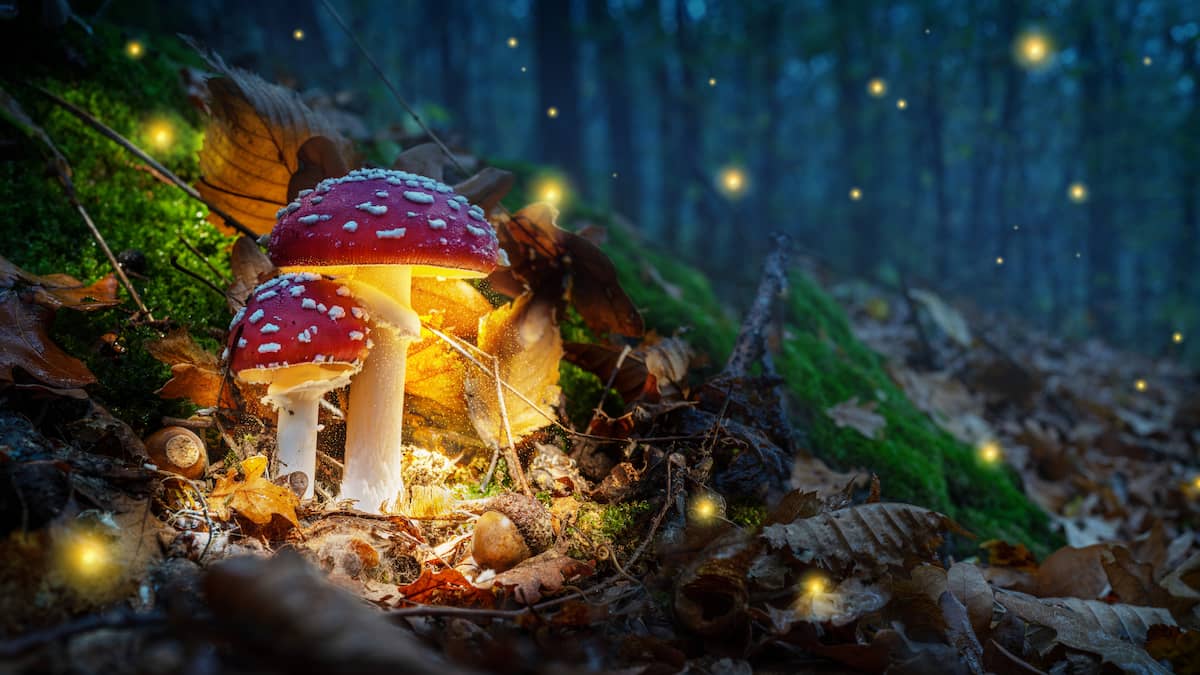 Written by Giles Edwards on August 26, 2022. Posted in Education

Foraging has become an increasingly popular past time, the ability to find food in the wild could assist with survival but also offers an immense sense of achievement and satisfaction.  It is important that the practice is carried out with care and attention to ensure that potential food sources are correctly identified.  Edible mushrooms are a great source of nutrition, however, there are some that are poisonous that could make you sick or in the worst-case scenario lead to death. 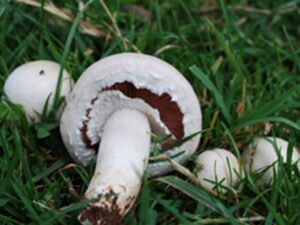 There are three main groups of mushrooms that foragers will look for, these are the parasites, which parasitise trees, plants and even insects, the saprobic mushrooms, which rot down old wood or other dead substrate, and the mycorrhizal fungi which attach themselves to the roots of host organisms transferring nutrients, among other things between themselves and the host. All interact heavily with their environments and as is the case with living organisms, the environment in which they develop and grow will have a direct influence on their exposome which by definition encompasses life-course environmental exposures.

For this study, we have focussed on one specific species of saprobic mushroom that commonly grows in grassland. The Field Mushroom, Agaricus campestris is probably the most commonly collected edible mushroom in the UK. It is also one that is commonly found on roadside verges, and is also regularly mentioned as a mushroom that can absorb pollutants from its environment. It’s genus has many edible members that grow in the same environment and it is likely that the results from this experiment would be reflected by those species.  The sampling was completed by Marlow Renton from Wild Food UK who is an expert forager and recently published a Foraging pocket guide.

It is proposed that a fruiting body of a mushroom that developed and grew in a polluted environment would absorb some of that pollution and become polluted.  Fruiting bodies that develop in a clean pollution free environment should reflect that in their respective exposomes.

When foraging close to urban areas there may well be times that foragable items are spotted close to a busy road.  These fruits may appear to be clean or pollution free but it is difficult to make that assessment using just eyes alone.  The following case study aims to investigate the influence of pollution on the fruiting bodies of mushrooms as a function of distance picked from a busy road.  Roads by their very nature are a serious source of pollution, the vehicles that use them exhaust a mixture of gases including water and carbon dioxide, mixed in with the major combustion products are other more toxic gases and also some metal particulates from the wear and tear of the engine.  Modern vehicles are equipped with catalytic converters that serve to chemically convert many toxic emissions into a more inert and less harmful gases.  It is hypothesised that concentrations of the catalysts used in the catalytic converters may well be higher in the soil and/or mushrooms found closer to the road.

Inductively Coupled Plasma Mass spectrometry (ICP-MS) is a sensitive analytical technique used to measure ultra-trace levels of metals present within a sample.  Samples must be water soluble.  Solid samples may be analysed by ICP-MS following on from sample preparation that usually involved acid microwave digestion.  Once in solution the samples are sprayed into an argon plasma which could be up to 10,000 ºC, the water will evaporate and the high energy of the plasma will cause any metals present in solution to ionise which are charged versions of the atoms.  The mass spectrometer will then separate the different masses of the ions and record their abundance which is proportional to their concentration within the sample.

In order to assess the uptake of various metallic toxins, a simple experiment was conducted to test the hypothesis that mushrooms picked closer to the road contained a higher level of toxicity than those picked further away from the road.  The influence of the substrate on the mushrooms would also require careful consideration by analysing soil substrate samples collected from the same sampling locations as the mushrooms.

Mushroom samples were picked along with soil samples from the same spot at various intervals moving away from a busy road in Hereford.  The collected samples were stored in sterile containers and transported to the Artemis Analytical laboratory for analysis.  Once received the samples were dried in a drying oven for 24 hours at a temperature of 80 ºC.  The samples were ground up in a pestle and mortar, ~0.1 g samples from each was weighed accurately, the same sample preparation was used for the mushroom and soil samples.  A supermarket-bought field mushroom was also prepared in the same way and analysed as a point of reference.

The powdered samples were each digested with 10 mL of concentrated nitric acid in a microwave digester on full power for 2 hours until the solids had fully dissolved and everything was in solution.  The acid digestate was made up to 100 mL, filtered and then analysed using ICP-MS.

The ICP-MS instrument was setup and calibrated using external standards, a broad suite of elements was measured including the precious metals found in catalytic converters.

Limitations
1. It is worth noting that these tests are by no means exhaustive, only the metallic elements were screened and measured.  The vitamin content and nutritional value was not assessed in this study. This is possible using a different type of mass spectrometry, it would make an interesting future study.

2. It was impossible to separate the grass roots and other organic matter from the soil samples. Therefore, where we refer to soil it is really the soil and growing substrate.

3. Samples were taken from as regular intervals as possible from the road, though as they were growing naturally precision was impossible.

4. Only 1 species of edible mushroom was used for the test, this can be assumed to be reflected by other members of the genus, but these results do not apply to all fungi, edible or otherwise.

5. Other variable natural factors that may influence these results such as wind direction have to be assumed to be homogeneous in these results.

6. Assumptions have to be made about whether the source of the pollution was the growing substrate or airborne particles as the process itself was not observed, though the data collected informs those assumptions with reasonable veracity.

The results presented below for the soil and mushrooms sampled at 0 metre distance from the road samples were collected from the centre of Hereford right next to an extremely busy A road, these data are marked with the red star on the plots below.  The other samples were collected at locations of increasing distance from a road in a more rural locality close to Hereford.  The green star data point is from the supermarket-bought mushroom and is included as a point of reference.

For the vast majority of the elements measured in both the mushroom and soil samples it was found that their respective concentrations were higher in the samples collected closer to the road than those collected further away.  The palladium and platinum results presented in figures 2 and 3 respectively clearly demonstrate the inverse relationship between collection distance from the road and concentration. 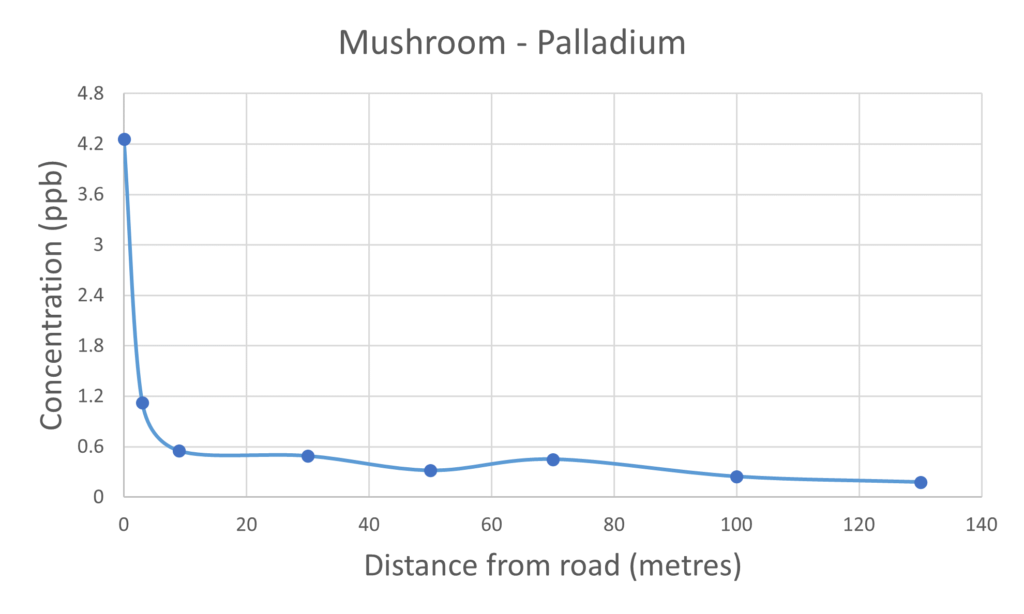 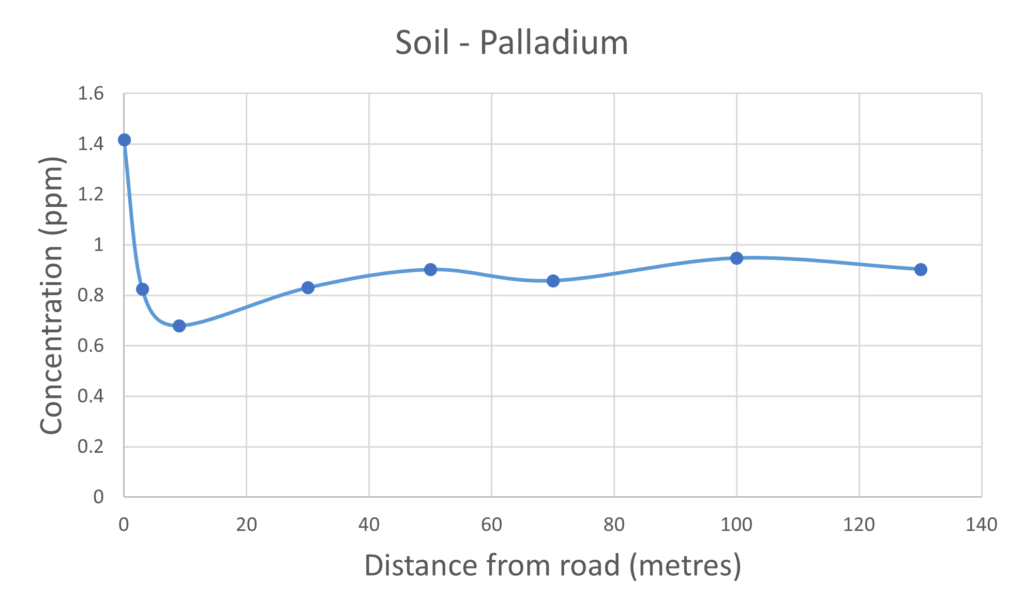 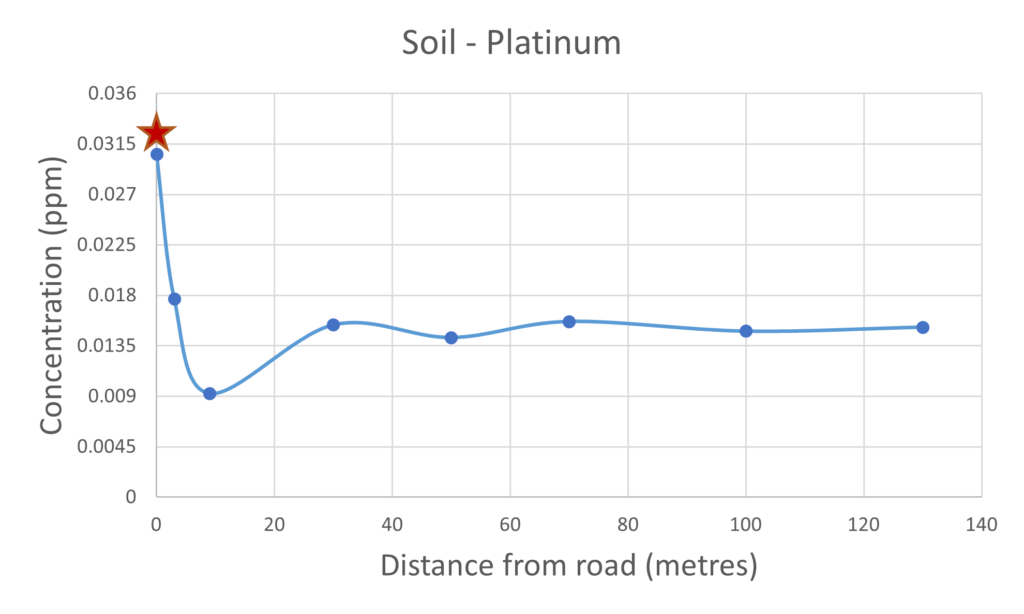 Iron is an ubiquitous element present in high concentrations in many locations on the earth’s surface and is an essential element of life.  There was not a clear cut relationship between the concentration of the iron measured in the mushrooms collected closer to the road when compared to mushrooms collected further away.  This would suggest that the uptake of iron expressed in the mushrooms was not effected by their proximity to the road.  It was noted that the concentration of iron within the soil sampled close to the busy road was significantly higher, this would be expected due to the build up of rust from road vehicles.  When comparing the soil and the mushroom results for iron there does not appear to be such a pronounced correlation.  The iron results contrast significantly with the platinium and palladium results suggesting that perhaps the uptake of these metals may be less selective with respect to the iron. 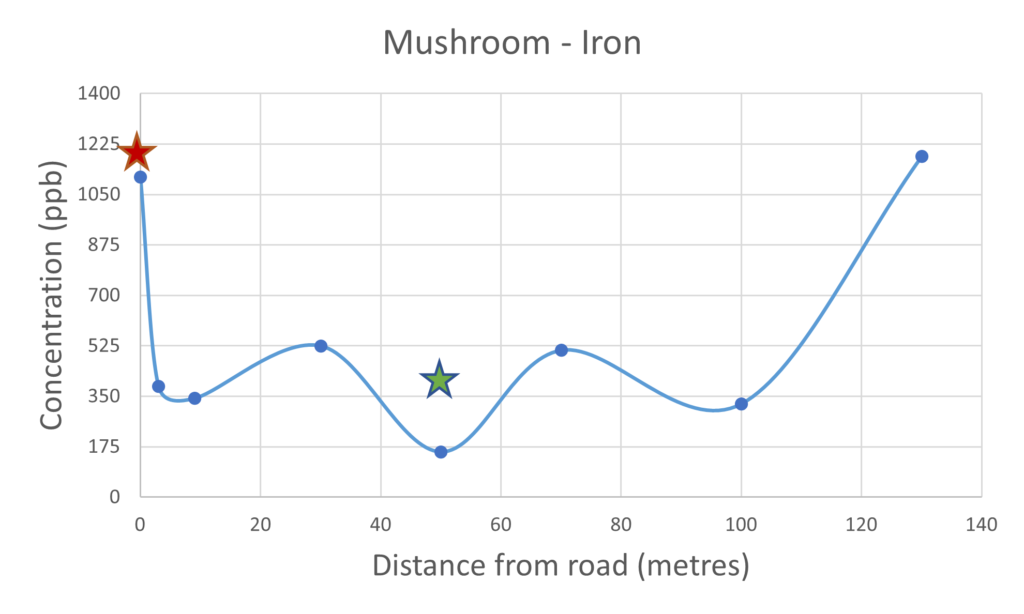 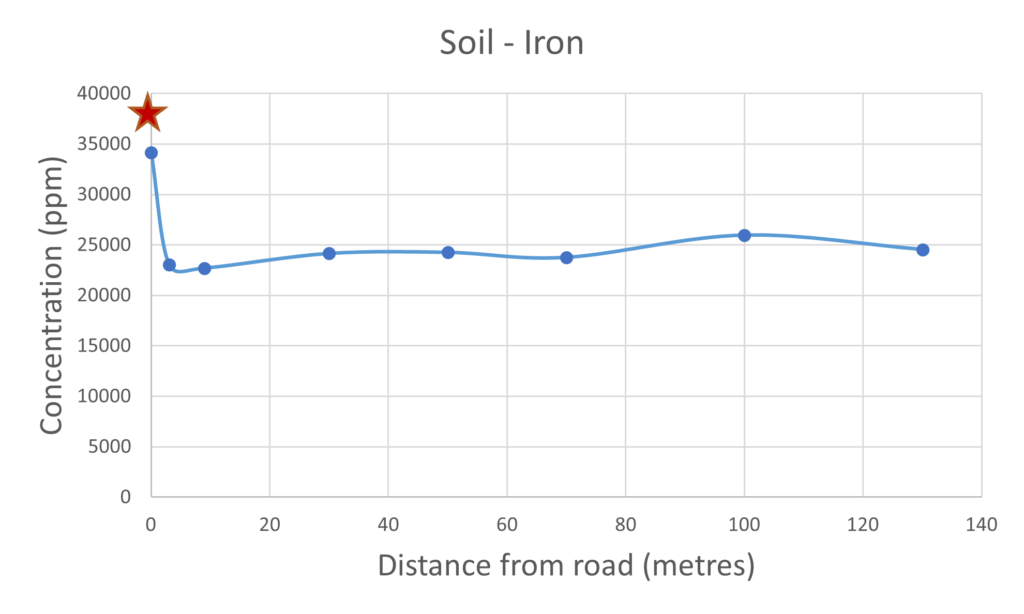 It is worth noting that the mushrooms analysed during this study were not washed prior to them being dried and prepared for ICP-MS.  This leaves the question unanswered as to if the exact source of the metal contaminants measured, had been adsorbed onto the surface or were present inside the mushroom’s fruiting body.  Additional work is required in order to determine which part of the mushroom contained the highest concentration of the metal contaminants, skin, flesh on the top or flesh in the stalk. 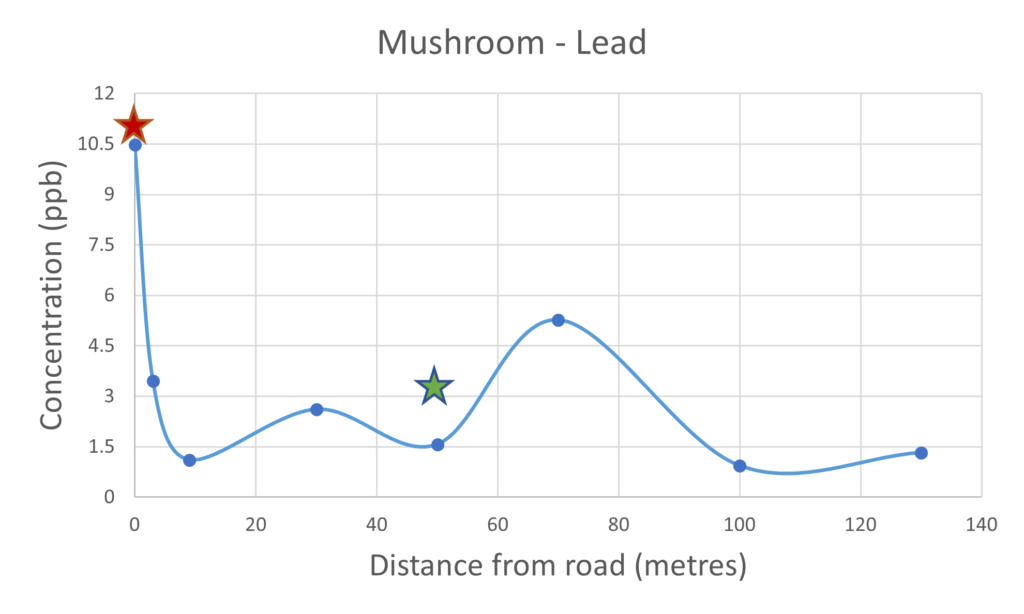 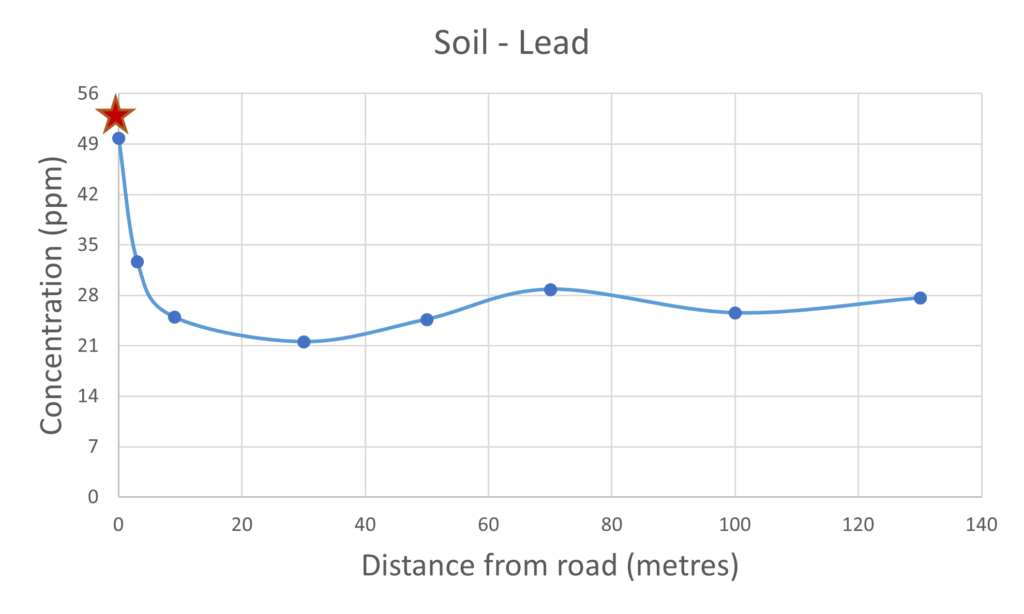 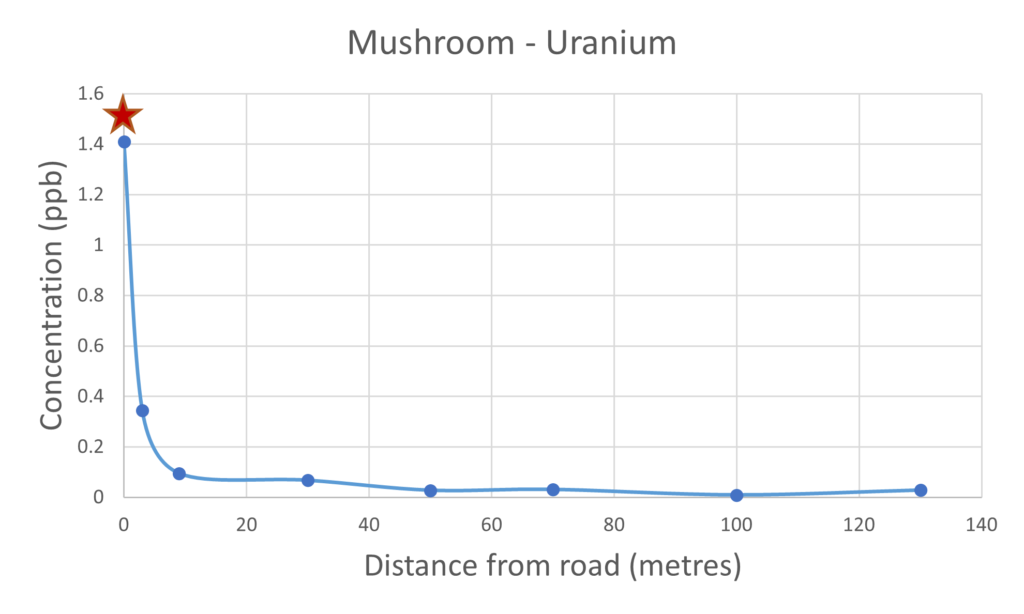 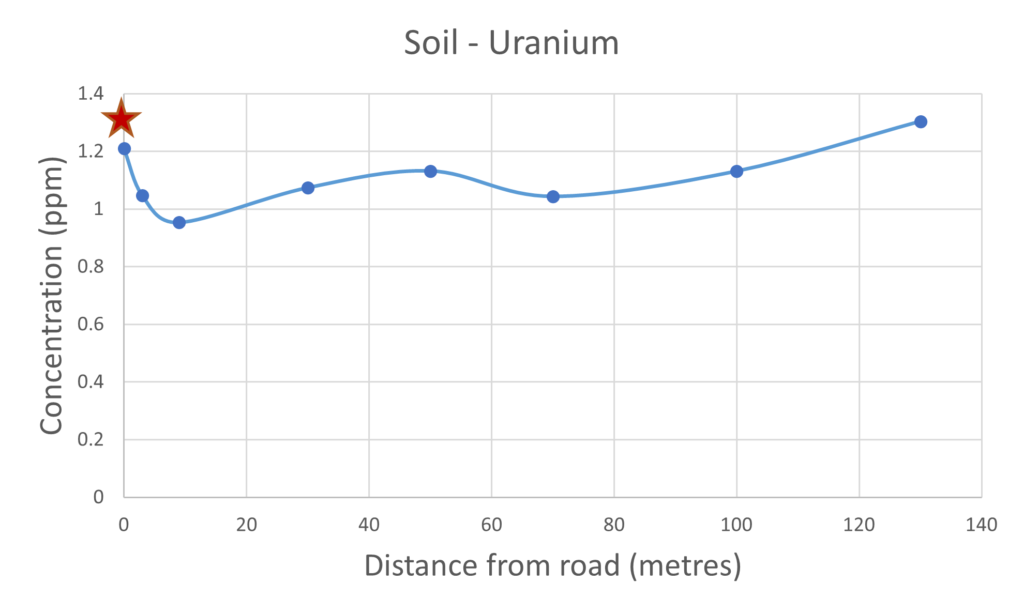 Uranium is a very toxic heavy metal and is found naturally, it has been reported in the past that significant quantities of uranium have been measured in the Hereford area by the Hereford Time, the radioactive decay product is radon gas which can pose health risks.  The results we present in this article clearly demonstrate that a higher concentration of uranium was measured in the mushroom samples collected next to the busy road.  It is unclear why the levels of uranium are significantly higher closer to the road, this does require further investigation with additional samples taken at different locations.

The mushrooms that were foraged as far as their heavy metal content was concerned did not pose a health risk with excessively high concentrations.  It could therefore be concluded that they were safe to eat, however, from the concentration plots for most elements under investigation there is a clear drop off in the concentrations of the heavy metals measured as a function of distance picked from the road.

As with any food that is foraged, it is always advisable to wash it prior to consumption.

There is plenty of scope for additional studies to be carried out as mentioned in the discussion, a repeat of the experiment with additional sampling points would be very useful.  It would also be interesting to wash a sample set of mushrooms prior to analysis to determine if the contaminants were only present on the skin, the water used to wash the mushroom samples could also be analysed.